On #GivingTuesday2022, we have met our maiden goal of helping avert over 10,000 metric tonnes of greenhouse gases. Thank you! 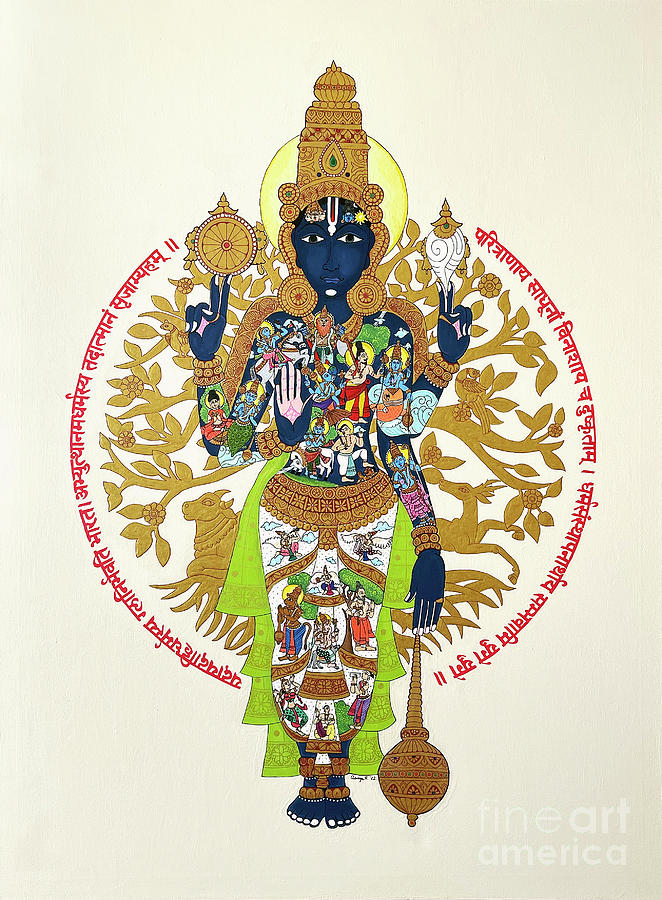 Viswaroopam (2022) is my first large-scale (3' x 4') original acrylic painting. It depicts Vishnu, the preserver in the Hindu pantheon, in his Universal form. On his upper body are depictions of his ten avatars (incarnations), which represent evolution. The avatars start with Matsya, the fish, followed by Kurma, the turtle, Varaha, the boar, Narsimha, the half-man, half lion, Vamana, the dwarf - representing early humans, Parashurama, the warrior-priest, representing man’s use of weaponry, Rama, the king, representing humans having leaders, Krishna, the cowherd, representing domesticated animals as well as leisure (music & dance), Buddha, the ascetic, representing the search for spiritual answers, and finally Kalki, the destroyer, who will descend on Earth to rid the world of evil.

Represented on his lower body are Ganesha, the elephant-headed god of wisdom and Hanuman, the divine monkey, as well as an Apsara (heavenly dancer), angels, a sage, and priests. Depicted on Vishnu’s forehead are Brahma and Shiva, the other two members of the Hindu Holy Trinity.

In the background is the “Tree of Life” with two verses from the Bhagavad Gita inscribed around it. In these verses, Krishna reassures the Pandava prince Arjuna during the Kurukshetra war, “Whenever there is decay of righteousness, O Bharata [Arjuna], and there is exaltation of unrighteousness, then I Myself come forth. For the protection of the good and the destruction of the wicked, I incarnate from age to age."